My maternity leave is passing quickly!  Being home for this length of time has had its ups and downs.  I was recovering the first few weeks, but I quickly began to get a little bit of cabin fever and I needed to get out of the house.  I still get that feeling every once in a while, but I have found more things to do with the baby and keep myself pretty busy.

As promised, this post is about cloth diapering!  I have been asked by multiple people about my decision to use cloth diapers.  Initially when I told people that my husband and I planned to use cloth diapers people thought we were crazy.  We were asked why?!? and told that we would probably give up on it, but we are still using cloth.

Here are my tips and lessons learned…

I decided I wanted to use cloth diapers a while back, mostly because I try to live a green lifestyle and I knew they could save us money in the long run.  Once we found out we were pregnant I told my husband I would like to try cloth diapers…he was not on board initially.  I think most people picture the old school cloth diapers (that many people now use as burp clothes) with pins and rubber pants.  Cloth diapers have come a LONG way.  I showed my husband the new cloth diapers and explained how they worked, then he agreed to give them a try.  I began researching cloth diapers and spoke to a friend that had tried out several diapers to see what she recommended.  We decided on the bumGenius Freetime All-in-one One-size cloth diaper.  I picked these because I thought they would be the easiest to use, although they are more expensive than other diapers with inserts.  The Freetime diapers are one-size, so they fit babies weighing 8 – 35 lbs and they are considered all-in-one because there are no inserts to use or extra pieces. They also come in a lot of cool colors!

Some of my tips are:

2) GET A DIAPER SPRAYER!  I had never heard of these until my friend told me.  bumGenius makes a great one that I use.  You use a diaper sprayer to clean the diapers over the toilet so you don’t have to dunk your diapers in the toilet to clean poop.  The sprayer works kind of like the sprayer that is on your sink.  It is great for infant diapers since there poop can’t really be caught with diaper liners.  Diaper liners can be used once the baby begins eating solid food.  Then you can toss the poop and liner in the toilet and flush.

3) The sun can remove almost any stain or dinginess from your diapers.  I read this online and didn’t believe it.  After you wash your diapers there are stains sometimes, even though they are clean…similar to a clothing stain that won’t come out.  If you lay your diapers in the sun (inside or outside) to dry the stains will come out.  I typically dry my diapers outside on nice days because they dry quicker. I have been able to remove all of my stains so far just using sunlight. 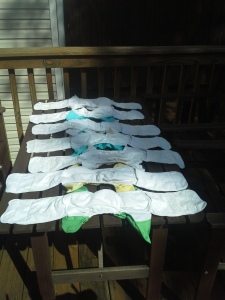 5) Purchase a few wetbags to store your diapers until they are ready to wash.  I purchased one large wetbag and two smaller ones to send to daycare, when my son starts, and to use around the house.  My grandmother also made me two smaller ones that I have been keeping in the diaper bag.

6) Look for sales!  As I said above, cloth diapers are expensive, but they are cheaper in the long run…especially if you use them for more than one child.  I was able to get all my diapers when they were on sale through the Cottonbabies site and Target. You could also include the diapers on your baby registry if you are having a shower.

Some other items you will need are a drying rack or clothes line and clothes pins.

Those are my top tips so far… 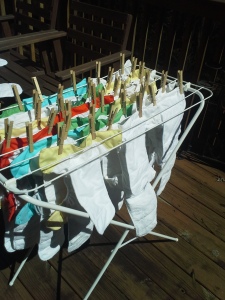 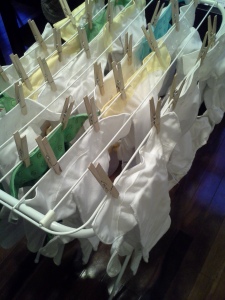 You will usually wash diapers every 2 – 3 days depending on the number of diapers you have and how many your child uses in a day. I have 24 diapers and I usually wash every 3 days. You probably don’t want to keep diapers dirty much longer than that because it is not good for the diapers. You could also consider a diaper service which is an additional cost (could include on your registry as well) if you did not want to wash.

As I learn more about cloth diapering I will continue to share.